Location
The Town of Los Gatos is nestled at the base of the Sierra Azules, and is located approximately 60 miles south of San Francisco, in the southwestern portion of Santa Clara County where the Santa Clara Valley meets the lower slopes of the Santa Cruz Mountains. Los Gatos is bounded by the City of San Jose to the north and east; the City of Campbell to the north; the Cities of Monte Sereno and Saratoga to the west; and unincorporated County of Santa Clara and the County of Santa Cruz to the south. 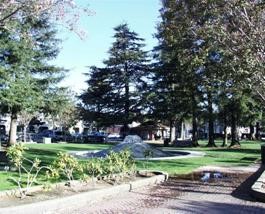 The Los Gatos Planning Area encompasses a wide variety of terrain, ranging from flat topography at the edge of the valley floor to densely wooded hillsides. Both the valley and hillsides are interspersed with creeks, streams and riparian habitat. The sharp contrast between the valley floor and the hillsides provides the Town's picturesque background.

History
Los Gatos is one of Santa Clara County’s oldest communities. In 1840, the Mexican government granted a land patent for a 6,600 acre rancho to Sebastian Peralta and Jose Hernandez. Los Gatos was originally named La Rinconada de Los Gatos (Cat’s Corner) by early settlers due to the screams of mountain lions prowling in the night. In 1868, 100 acres of the rancho was selected as a town site. The Town was incorporated in 1887, and by 1890 the Town’s population had grown to 1,652. When the first General Plan was adopted in 1963, the Town had grown to an area of approximately 4,000 acres, or 6.3 square miles, with a population in excess of 11,750.